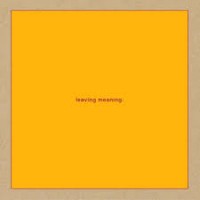 leaving meaning. represents the start of a new era for Swans, after the group's leader Michael Gira dissolved the line/up responsible for the triptych of stunning, epic records from 2012 to 2016. Now based around a rotating cast of former and new members of the group, they've produced an album which, at a brisk 93 minutes, isn't quite as long as their recent works, but is sure to please fans nonetheless.