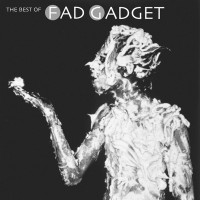 Francis John Tovey, better known as Fad Gadget recorded for Mute. He appeared along with a number of trailblazing electronic acts such as Human League, Cabaret Voltaire and The Normal. His particular blend of industrial and new wave was played on synths and whatever he had lying about such as drills and electric razors and had a pop edge. The Best Of Fad Gadget includes tracks from 1980's Fireside Favourites, 1981's Incontinent, 1982's Under The Flag and 1984's Gag.