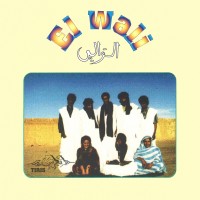 An amazing and rare studio recording of 1990s Polisario music! The album is a standout example of the Sahrawi political folk style that mixes traditional modes with Western scales and instrumentation. response vocals, The repertoire of El Wali is fiery and inspirational, a call to arms / with national anthems, celebrations of political anniversaries, and religious pleas for peace, with call and response duets, backed with a synthesizer, programmed drums, and electric guitar. Nomadic inhabitants of Western Sahara, the Sahrawi movement for liberation began in the 1970s and has continued until today. Sahrawi political folk music dates back to the origins and has played an integral role in the struggle, with political anthems creating a national identity. One of the first Saharan music to incorporate the electric guitar, the style was hugely influential on the better know Tuareg guitar genre. The later addition of synthesizer and programmed rhythms further transformed the sound, becoming a foundation of Sahrawi music. Recorded in Belgium in 1994 while on tour, this version of El Wali performed a style reflecting the popular music of the refugee camps.

Briggs, Anne
The Time Has Come