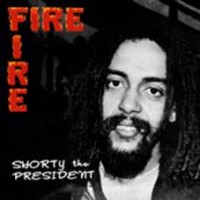 Jamaican deejay Shorty The President may have been one of the more obscure figures to rise from the Kingston sound system scene, but the impact he made on vinyl recordings during the 1970s is no less important and his work remains coveted by reggae connoisseurs. Born Derrick Thompson in rural Trelawny in 1949, like many of his peers, he moved to the Jamaican capital as a teenager in search of better opportunities. As he gravitated to the Rastafari faith, an affiliation with the sound system Conquering Lion sparked interest from producer Rupie Edwards, who produced debut hits "President Mash Up The Resident" and "Yamaha Skank." Edwards issued debut album Presenting Shorty The President in 1976 and after sparse work for Enos McLeod, Joe Gibbs, Pete Weston, Winston Riley and Keith Hudson, sophomore album Fire Fire was produced by Bunny Lee in 1978, with Shorty riding typically tough Aggrovators rhythms of the day, including Ronnie Davis' updated version of Bob Marley's "Kaya" and The Cables' "Baby Why," Delroy Wilson's "Have Some Mercy" and Barry Brown's take of Wilson's "I'm Not A King," as well as killer cuts of Brown's "Natty Roots Hold Them" as "Roots Man" and "Best Thing In Life" as "Do My Thing."