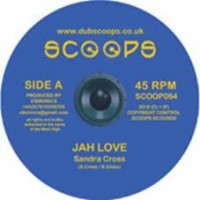 As we continue our project with the Foundation voce of UK Reggae - Sandra Cross - the next instalment is the electrifying 7" Sound System weapon called 'Jah Love'. This monster riddim has been shaking up speakers across the dub world all summer.Sandra Cross needs no introduction, she is a true legend whose career begun at the age of 14 with a no.1 hit in the UK Reggae charts. Since then she has gone on to be one of THE defining female voices of British Reggae. Sandra's award winning career has seen her hook up with the likes of Mad Professor and Sly & Robbie for a near endless round of hit singles & albums.Vibronics, the future sound of dub, have been vibrating the world with bass since 1996. Their music is at the forefront of the UK Dub scene, proven by over 60 releases on their own legendary SCOOPS label as well as a host of albums, singles and remixes for a myriad of other labels such as Jarring Effects, Dubhead and Jah Tubbys. In the studio they have worked with Michael Prophet, Iration Steppas, Macka B, Aba Shanti, Brain Damage, High Tone, Big Youth, Gaudi and an almost endless list of dub & reggae luminaries.

Junior Murvin
Muggers In The Street