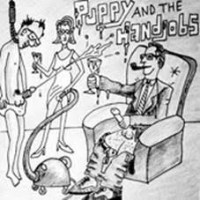 Puppy And The Hand Jobs
I Hate Everything

The three obnoxious jack/offs known as PUPPY AND THE HAND JOBS are back with another crude EP of filth ridden, barely listenable & tolerable punk called 'I Hate Everything', and with 7 songs this time around, thats only a buck a track in as many inches. WHAT A FUCKIN BARGAIN. Never before in the history of recorded music has it been so cheap and effortless to be insulted and assaulted with a swift kick in the genitals by @songs@ with titles like 'Cocksucker' and 'Rocker Hag'. But even a band of total degenerate creeps like this can still muster a touch of class here and there> enter one-time SUN CITY GIRLS collaborator Eddy Detroit who penned the shitty little ditty 'Plan 9' - a catchy track that will have you singing along like a dope before Puppy threatens your puny, worthless existence with 'Predator'. WARNING... the actual record cover for this release isnt nearly as polite as the digital artwork. Youll be reaching for the dull pencil it was drawn with and stabbing your eyes out upon first glance.

Puppy And The Hand Jobs
I Eat Abortion Ep