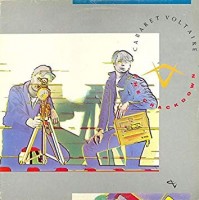 Here we have a reissue of Cabaret Voltaire's fifth LP The Crackdown. The first full-length the band released after the departure of founding member Chris Watson, this is a disorientating and sinister set of industrial anti-pop tunes. The Normal and Fad Gadget are evoked by The Crackdown's avant blend of techno, minimal wave, synth-pop and more. It was named the 11th best album of 1983 by the NME, don't you know.

Cabaret Voltaire
The Covenant, The Sword And The Arm Of The Lord

Maze & Lindholm
Where The Wolf Has Beeb Seen