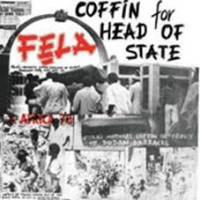 Previously only available on vinyl as part of the Box Set series many moons ago, Knitting Factory issues Fela Kuti & Africa 70's politically and emotionally charged Coffin For Head of State album. Originally released in 1980, it takes aim at the brutality of the Nigerian army at a 1977 incident in Kalakuta, one in which Fela's activist mother sustained serious injuries, from which she ultimately died.

Fela Kuti
Beasts Of No Nation