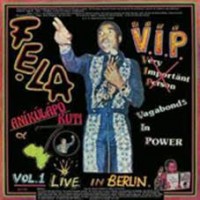 Previously only available on vinyl as part of the Box Set series many moons ago, Knitting Factory re-issues V.I.P. (Vagabonds In Power). Originally released in 1979 and recorded at the Berlin Jazz Festival the previous autumn, it's a portrait of Fela Kuti in transition. Not only was it recorded right between the break-up of his Africa 70 group and the formation of Egypt 80, it was the last album that Fela made with long-time drummer Tony Allen.