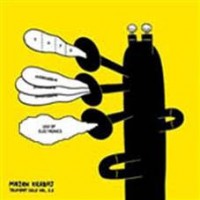 Comic book artist, graphic designer and free jazz improviser are only some of the many talents from Beirut born Mazen Kerbaj. After appearing as part of various ensembles on the label, Ariha Brass Quartet and Johnny Kafta Anti-Vegetarian Orchestra, Kerbaj finally lands a solo outfit of his own onto the Discrepant dancefloor of insubordination. Fourteen years after his first (and only) solo album 'Brt Vrt Zrt Krt' (Al Maslakh, 2005) Mazen returns with a series of subtle compositions of his own with two solo albums of prepared trumpet that further cement his international position as a serial trumpet botherer. Whilst 'Vol. 2.1' showcases his (almost) (un)familiar arsenal of squawks, cackles, howls and squeals, 'Vol. 2.2' goes deep into the nether regions of waltzing drones and bell tweaks so deep that would make most cetaceans loose their concentration.