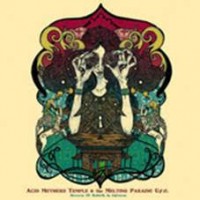 Repress!!!! Red vinyl.Original members Kawabata Makoto (guitar, speed guru) and Higashi Hiroshi (synthesizer, noodle god) are here joined by Jyonson Tsu (vocal, midnight whistler), Satoshima Nani (drums, another dimension) and Wolf (bass, space and time) and as anyone that has seen the new line up live will testify, things have gone even more cosmic. 'Reverse Of Rebirth In Universe' sees the band return to their old label Riot Season for the first time since 2012's 'IAO Chant From The Melting Paraiso Underground Freak Out'. Both label and band have gone on some wonderful journeys during that time apart but both felt the stars were finally correctly realigned to renew their partnership in all things weird. Long time AMT fans will immediately recognise some of the song titles listed on the album sleeve here. But the songs themselves have been reworked and transformed far away from their original versions. New boy Jyonson Tsu's quiet, almost whispered vocals bring a whole new aura to proceedings, despite the familiar riffs hidden in the depths below them. It's so laid back in places it's practically horizontal, with only occasional trademark piercing guitar squeals threatening to destroy the peace and calm. The whole of side two is taken up with the twenty minute epic 'Black Summer Song' and if this is an indicator to where the AMT mothership is heading going forwards we're all in for another fucked up and magical ride