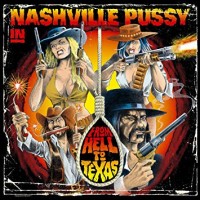 Nashville Pussy
From Hell To Texas

Through four albums and relentless touring, Atlanta-based Dixie shock-rockers Nashville Pussy have built a well-oiled, dirty little empire both at home and abroad, Googling their name without quotes yields at least three pages of relevant information before descending into a virus-laden chasm of amateur porn. The band's fifth full-length album does little to tarnish their reputation as hard-drinking, stripper-pole-grinding, pistol-wielding heathens from a Southern Gothic graphic novel. If anything, From Hell to Texas solidifies the group as America's answer to Motörhead, a streamlined, in-your-face wrecking crew that owns the bar as soon as they walk in, leaving its customers bloody, broken, and usually better for the experience. Musically, Nashville Pussy deliver the goods raw (think Blackie Lawless fronting a Southern-fried rock version of the Stooges), stacking redneck euphemisms on top of dirty, boogie-metal riffs like wartime heads on a pike, each track ("Speed Machine, "Stone Cold Down") sounds exactly like its title would suggest. That said, they're here to yell along with the audience, not at it. There's an inclusiveness to the whole affair that feels more like a sweaty punk rock pit "boot to the head & hand to help you up" than it does your standard, everything goes, bayou bar brawl. That attitude rings clearest on the blistering title cut, a straight-up swamp rocker that pretty much sums up Nashville Pussy's mission, and when Blaine Cartwright sings "I was born to die in a rock & roll band" and the band replies "Drink up everybody, we-re goin- back on the roa" it's awfully hard not to want to crawl into the back of the van and ride into the sunset with them.

Nashville Pussy
Get Some