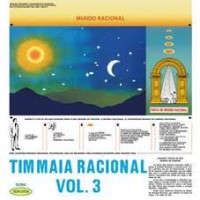 Just as Tim lived his life doing everything the hard way, so went the making of Racional Vol. 3. Only a handful of people knew about the existence of a rumored third volume of Rational recordings until 2007, when some songs appeared on a Brazilian blog, described as the lost Rational recordings, presumably recorded at the end of his time with Rational Culture.Tim Maia Racional Vol. 3 is just as essential an artifact of Tim's time involved in Rational Culture as the first two albums.At the height of Tim Maia's soaring fame, he joined a radical, extraterrestrial/obsessed cult and created two plus albums of some of Brazil's (and the globe's) best funk and soul music. This book explores the career of the man often hailed as the James Brown or Barry White of Brazil, and the time of his radical transformation from a musician notorious for hedonistic living to a devoted follower of Rational Culture.After suddenly joining Rational cult in 1974 (which started first as an offshoot of the mystical Afro-Brazilian religion Umbanda), Maia gave up drugs and alcohol, threw away his material possessions, and released Racional Vols. 1 & 2 in the attempt to convert the entirety of Brazil and the world to the revelation of Rational Culture. Thayer explores this strange, brief, yet incredibly prolific period of Maia's life wherein the reigning soul and funk artist of Brazil produced two albums, an EP, and a recently unearthed tape containing almost another full album of funky jams laced with spiritual content and scripture. For just as quickly as Maia became entranced with Racional did he become disillusioned with the cult, disavowing and destroying everything having to do with that experience and refusing to speak of it for the rest of his life.TRACKLISTSIDE AA1. É Preciso Ler E RelerA2. I Am RationalA3. Lendo O LivroA4. O Supermundo RacionalSIDE BB1. Nacao CósmicaB2. Que LegalB3. Você É A Estrela Do Meu Show B4. Vê se Decide