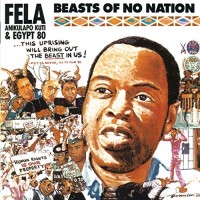 Fela Kuti
Beasts Of No Nation

Beast of No Nation is the first song Fela wrote in 1986, after he was liberated from prison-serving two years from a five year prison sentence for trumped/up foreign currency violation charges. Everywhere he went after his release, people were asking him what he was going to sing about, Fela wetin you go sing about? Them go worry me!". People wanted to hear him sing about his prison experience, like he had done with the songs like, Alagbon Close, Kalakuta Show, and Expensive Shit. Finally, he decided to sing about the world we live in-with particular reference to Nigeria. He said when he was in prison he called it nside World', out of prison he called it utside World'. But for him it is actually Craze World'.