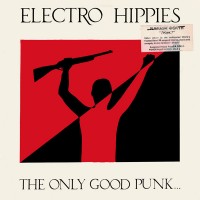 Cult UK crust punk&metal act Electro Hippies was formed in 1985 in Wigan by Simon (drums) & Bruno (Bass), followed by Andy on guitars (and then vocals). Originally setting out with the short-lived intention of recording a single demo (even featuring Jeff Walker among their ranks before moving on to Carcass), the band went on to release the seminal "The Only Good Punk Is a Dead One" in 1988, among the very first proper releases on the newly formed Peaceville Records.The album was recorded November & December of 1987 at Lion Studios in Leeds, West Yorkshire, & saw a release the following year. It demonstrated a perfect attack of lo-fi crust, hardcore and grind, with Electro Hippies also notably recording a session for the legendary John Peel. The band eventually split in 1989 though have always retained a strong cult following.Marking 30 years of Peaceville with a series of early classic titles on the format, this vinyl edition is presented with its original vinyl sleeve.

F.u.'s
Kill For Christ/ My America