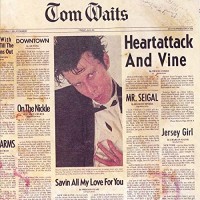 Waits' sixth album was his last non-soundtrack work before his reinvention on Swordfishtombones, but it's already a shade less polished than his previous few outings. Standouts include the raw blues of the title track, later adopted by Screamin' Jay Hawkins, and future Springsteen hit Jersey Girl. The ballads are particularly devastating - the lover's reluctant abscondment on Ruby's Arms and On the Nickel's lament for the destitute.