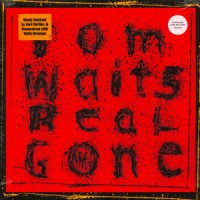 Real Gone from 2004 sees Waits and his long time collaborator, wife Kathleen Brennan pen and produce a melting pot of styles. 15 tracks of Funk, Jamaican Rocksteady, urban and rural Blues, African and Latin rhythms and melodies feature on this fine release. The album features some of the few political songs Waits has written, the most explicit being Day After Tomorrow, a song Waits has described as an 'elliptical' protest against the Iraq War.