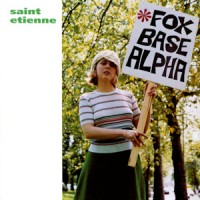 Foxbase Alpha is the 1991 debut album by Saint Etienne and it is a wonderful mix of both modern and retro influences with house music, ambient, samples and 60s pop coexisting easily for a unique sound not found anywhere else at the time. It is best known for their popular cover of Neil Young's Only Love Can Break Your Heart. Foxbase Alpha had such an impact upon its release that it was nominated for the Mercury Prize eventually losing to Primal Scream's Screamadelica.