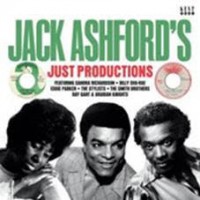 Famed as one of the tight-knit group of musicians the Funk Brothers, who played on the vast majority of Motown's 60s records, Jack Ashford was the percussionist and vibes player who augmented that infectious beat so successfully.After his time at Motown he co-founded Pied Piper Productions with Shelley Haims and when that folded in 1967 started his own Just Productions. The infectious beat continued to propel many of their releases but the main songwriters 'Jack, Lorraine Chandler and George Rountree' added great new melodies and well-crafted songs and then a big injection of Motor City funk. They unearthed talented singers like Eddie Parker, Sandra Richardson and the Smith Brothers and even employed Jack's own voice. Parker's 'I'm Gone' and 'Love You Baby' are considered the epitome of ampheta-soul by UK devotees, who have adored the records since the early 70s. The Smith Brothers' output is all high class and their full take of 'Things Won't Be The Same' (which shares the backing track of Sandra Richardson's 'After You Give Your All') is available for the first time. Similarly the new version of Jack Ashford's recording 'I'll Fly To Your Open Arms', by the Family Brick, debuts here, it is a masterful slice of sophisticated, uptempo Detroit soul. Then a new singer in the city, Billy Sha-Rae's 'The Story Of My Life' sees its first vinyl outing and the mysterious Ray Gant & Arabian Knights' reading of 'Don't Leave Me Baby' is considered the ultimate rendition of this superb song. Al Gardner knew Jack at Sport/Boss Records and his 'Sweet Baby' has been a big collector's item for decades. Also, from the late 60s comes a terrific uptempo version of 'I Need Your Love (To Satisfy My Soul)', originally only known as an acetate by the Stylists, it was later cut at a slower pace by Lee Rogers on Premium Stuff. The LP is rounded off by Jack's own take on 'Let Me Take Care Of Your Heart', a remarkably fine recording that the Smith Brothers would later cover on a Shield 45.track listingSIDE ONE1.I'M GONE / Eddie Parker 2.SWEET BABY / Al Gardner 3.PAYBACK'S A DRAG / The Smith Brothers 4.LOVE YOU BABY / Eddie Parker 5.STAY HERE WITH ME / Sandra Richardson 6.I'LL FLY TO YOUR OPEN ARMS - The Family Brick 7.DON'T LEAVE ME BABY - Ray Gant & Arabian Knights SIDE TWO1.THINGS WON'T BE THE SAME (Full Version) / The Smith Brothers (Previously unissued) 2.I NEED A TRUE LOVE / Eddie Parker 3.I NEED YOUR LOVE (TO SATISFY MY SOUL) / The Stylists (Previously unissued) 4.THERE CAN BE A BETTER WAY - The Smith Brothers 5.CRYING CLOWN / Billy Sha/Rae 6.THE STORY OF MY LIFE / Billy Sha/Rae (Originally unissued) 7.LET ME TAKE CARE OF YOUR HEART - Jack Ashford (Originally unissued)

Various
A Record To Ruin Any Party. Vol.3