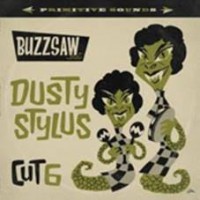 Buzzsaw Joint was born of a club offering Londoners the chance to revel in the sounds of good old trashy rock-n-roll in all its vintage vinyl forms. Club top/cat, Fritz, then took theprimitive Buzzsaw sounds online with a series of savage Mixcloud mixes created by record fiends from all over the globe. Now, the high-octane energy of Buzzsaw Joint hasmanifested into the physical form with a run of compilations on Stag-O-Lee. Get your ears around the wild-n-weird sounds of theextraordinary and inimitable Buzzsaw Joint! Dusty Stylus is a music junkie who lives in the country, a hundred kilometers north of Melbourne, Australia. He spent the late '80s drumming in -60s garage bands and now mainly gets his buzz from collecting post-war blues, R&B, and good old Aussie garagerock. He hosts a couple of nights, including the ever greasy Bacon Fat, and is often on the DJ bill at the phenomenal -Slow Grind Fever-. For the sixth -Buzzsaw Joint- cut, Dusty-s dusted off a purely top/shelf selection of his rare 45 and 78 rpm records. Take the edge off with a hit of this gear here.SIDE 11. Elmore James / I Was A Fool2. Two Crows & The Diggers / Poison Ivy3. Dennis Roberts / Come On4. Jolly Jax / Further Up The Road5. Tommy Williams & The Fingerpoppers / The Feeling Is Real6. Ted Taylor / I Don't Care7. Margo / Everyday8. Pearl Woods / Don't Tell It AllSIDE 21. Grade Wicker / Lulu Brown2. Piney Brown / I'm Traveling3. Tabby Thomas / My Baby's Got It4. Billy Ray Playboy5. Otis Blackwell / On That Power Line6. Leo Baxter / Please Pretty Please7. Big Jack Reynolds / Made It Up In Your Mind8. Moose John / Talkin' About Me