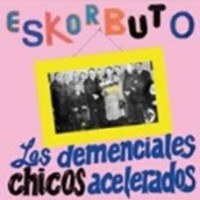 Back in stock!!! In combined red & blue colored vinyl!First ever vinyl reissue of 1987's opera rock by Spain's legendary punk band Eskorbuto.Housed in a controversial gatefold sleeve, the double LP is a political satirical work against any kind of dictatorial regime."Los demenciales chicos acelerados" is Eskorbuto's fourth studio album, originally released by Discos Suicidas in 1987. It was their most ambitious project, a double LP rock opera in the vein of "Quadrophenia" by their beloved The Who. It tells the story of an unscrupulous young man who wishes to achieve power at all costs, stepping over everyone and everything in order to do whatever he wants politically. In the end, he falls due to his ego and is betrayed by those around him. Hence lines such as "crowds are a nuisance", "I'll come unscathed out of the attacks planned by my image consultant" or "shouting in front of the scum".In 1988 band members Iosu and Juanma narrated the album's concept and story on a Radio Euskadi show, the Basque Country's public broadcaster. This satirical political plot also explains the controversial Nazi pictures on the front and back covers. Eskorbuto were equalling the unprincipled politician of their rock opera with the Nazis and Franco's dictatorship. It's a conceptual record that attacks any kind of dictatorial political regime.Although "Los demenciales..." came out on Discos Suicidas, in typical Eskorbuto fashion the band stole a copy of the master and sold it to the Twins label, which also released it a few months later with a different cover. The original sleeve caused some trouble, to say the least, with its combination of Nazi photos and the Spanish flag on the back accompanied by the words "Of national interest".The album contains new versions of a few previous tracks such as 'Ratas rabiosas' and 'Enterrado vivo' plus the studio version of 'Más allá del cementerio'. For the recording the band enrolled keyboardist Aitor Amezaga, who would also collaborate on their next album.This is the first facsimile vinyl reissue of one of the most piercing albums in Spain's rock history, by a band whose significance has crossed all kinds of borders.TRACKLISTSIDE A1. A PESAR DE TODO2. LOS DEMENCIALES CHICOS ACELERADOS3. LA CANCION DEL MIEDO4. MUCHO MAS FACIL5. LAS MULTITUDES SON UN ESTORBOSIDE B1. PAZ-PRIMERO LA GUERRA2. LA MARCHA DEL SIGLO XX3. JODIÉNDOLO TODO4. TRAGEDIA5. ASESINAR LA PAZSIDE C1. TRABAJO SUCIO2. CON MUJERES3. HIPOCRITAS4. CIUDAD CONFLICTIVA5. MAS ALLA DEL CEMENTERIOSIDE D1. EL INFIERNO ES DEMASIADO DULCE2. RATAS RABIOSAS3. SALVELO4. ENTERRADO VIVO5. NO ES FACIL