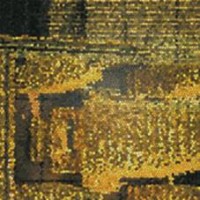 Manchester indie band Sprinters return with a brand new album. 'Struck Gold' is full of jangly guitars with a lovely, washed out yet engaging sound throughout.The self-titled debut released by Manchester's Icecapades label (2017) was labour of love combing elements of surf, indie rock and dream pop, on 'Struck Gold' the band explore different territory and offer a much more ambitious affair.Sonically the songs are more powerful, sound more focussed and the songwriting more streamlined. The indie pop side to the band is dramatically dulled down and instead the band offer up some of their raunchiest songs to date, dialling up the noise and combing it with raucous indie rock.TRACKLISTSIDE AA1. Struck Gold A2. 3s4sA3. Missing A4. The LightA5. EndingSIDE BB1. DemolitionB2. It's Gone B3. Scream 2B4. VirtueB5. UndoneB6. Struck Gold (reprise)

Dum Dum Girls
He Gets Me High Ep

Documenta
Lady With The Ring