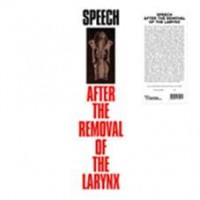 Various
Speech After The Removal Of The Larynx
Fantome | LP | 19 €

The larynx or voice box is a small organ located towards the top of the neck in humans and some other animals. Constructed largely of cartilage, it houses the vocal folds that allow for the manipulation of pitch and volume, which are essential for the phonation of spoken speech. It is also involved in bringing air to the lungs when we breathe and it protects the windpipe when we swallow. However, those unfortunate to experience the potentially fatal malignant tumours of laryngeal cancer will have their larynx removed, resulting in a traumatic loss of speech< thankfully, as this rare record issued by Smithsonian Folkways in 1964 demonstrates, removal of the larynx does not necessarily spell the end of speech for such blighted individuals. Instead, through developments in artificial voice creation, patients could learn to employ modes of vocal communication again. The album was recorded by physician Harm A. Drost at the Phonetic Laboratory of the Ear, Nose and Throat Dept of the University Hospital, Leiden, in the Netherlands, working under the direction of Professor H. A. E. van Dishoeck. As the advances were fairly new and surprisingly varied, Drost felt a phonograph album demonstrating the techniques would be useful for those in the field. The album thus features a narrator explaining aspects of several different techniques, followed by examples of patients employing them. Buccal speech (limited to certain consonants), parabuccal speech (collecting air in a space between the upper jaw and the cheek), glosso-pharyngeal speech (a method deemed obsolete where air is forced between the tongue and the palate), esophageal voice (made by reconditioning one's esophagus via swallowing, suction or injection), various injection techniques and devices such as the larynxophone, pipa di tichioni and "western electric" are all explored here, along with other aspects of the larynx and its absence. Speech After The Removal Of The Larynx is definitely one of the strangest albums ever given a commercial release!Tracklist 1 Coloratura Soprano Singer2 Man Wiithout Larynx3 Buccal Speech4 Parabuccal Speech5 Singing Voice6 Glossopharngeal Speech7 Frogsound8 Esophageal Voice9 Injection-Basic Sound Two Times10 Basic Sound Of The Esophageal Voice11 Basic Sound Of The Esophageal Voice, An Octave Lower12 Esophageal Voice By Telephone13 Singing Voice With Larynxphone14 Pipa Di Tichioni15 Western Electric