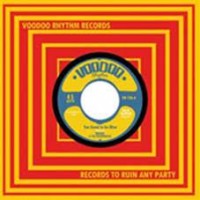 Trixie And The Trainwrecks
Too Good To Be Blue/get Busyliving

Folk Blues and Garage Beat Trash with Dusty Raw Roots played from the Hardest Working Gal in Rock-n-Roll Showbusiness, bluecollar honky tonk and folk-laced Blue Suede Shoes Trash up the Night Wild child, Trixie Trainwreck aka Trinity Sarratt was born in San Francisco and moved to Berlin on a whim when she was 18. She started her musical endeavors in the underground trains back in 1999 and went on to make a name for herself working in and promoting shows in almost every bar in town as well as touring the EU and the USA with a handful of bands (Kamikaze Queens, Cry Babies, Runaway Brides) and most recently with her one woman show as TRIXIE TRAINWRECK NO MAN BAND. She's probably the hardest working girl in showbiz and a mother, too!! To this day she travels around the world and plays mostly as Duet or Alone, as a Duet with Charlie Hangdog in London they recorded these 2 songs and dedicated a song to the city with the original London Beat "Too Good to be Blue" which is based on the work of the headcoats.

Trixie And The Trainwrecks
What Would You Do

Lee, Becky & Drunkfoot
I Wanna Kill Myself/ Clown Of The Town