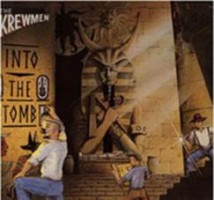 The third album of british Psychobilly legends, THE KREWMEN, was another smash hit, originally released in 1987, having a cool cover version of the the Clash Should I Stay Or Should I Go on board. Also covered by the Long Tall Texans at the same time. INTO THE TOMB was the last recording with Mark Cole, before he left the band into the unknown!