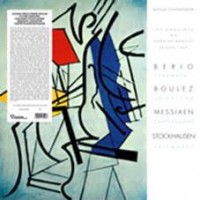 The avant-garde composer and conductor Pierre Boulez was a titan of post/War experimental classical music. Born in the small cheesemaking town of Montrbrison in central France in 1925, Boulez studied at the Paris Conservatoire with the composer and organist Charles Messiaen and received private tuition from pianist Andrée Vaurabourg, after moving to the Marais district in 1945, he briefly studied with Schoenberg disciple, René Leibowitz, and further influence came from immersion in Balinese gamelan, Japanese classical music and African drumming, among other sources. Earning money by playing an early electronic keyboard called the ondes Martenot on theatre productions, Boulez soon became music director of the Renaud-Barrault theatre company (led by actor/direction Jean-Louis Barrault and his actor wife, Madeleine Renaud), leading to tours of Belgium, Switzerland, Britain and both North and South America. American composer John Cage became an ally, though they subsequently clashed over Cage's commitment to the role of chance in his compositions, paving the way for an intense and lasting friendship with the German composer, Karlheinz Stockhausen, who arrived in Paris in 1952 to study with Messiaen. In July of that year, the pair attended the International Summer Course for New Music in Darmstadt, leading to contact with Italian composer Luciano Berio and other noteworthy figures. Then, in 1954, with backing from Barrault and Renaud, Boulez began staging a series of concerts of experimental music at the Petit Marigny theatre, titled Le Domaine musical. The pieces collected on this album are all taken from performances staged for the 1957 Domaine musical season, beginning with Berio's "Serenata I," conducted by Boulez, which debuted in Paris in March of that year, arranged for flute and fourteen instruments, Berio said that the idea behind the piece was for the solo flute to be confronted by continuously interchanging elements, rather than mere accompaniments or oppositions. Boulez's own "Sonatine," composed in 1946 for flute and piano, is a 12-tone piece that evidences Messiaen's influence, with shades of Asian classical music in places, then, Stockhausen's monumental "Zeitmasze" or "Time Measures," a serial composition for five woodwinds, played in different combinations of tempos and speed, was partly inspired by Webern's principles of homogenous and harmonic textures. Finally, Messiaen's 1949 work "Cantéyodjayâ," delivered by pianist Yvonne Loriod, takes it shape from the classical Hindu rhythms of ancient India, as with much of the composer's oeuvre.