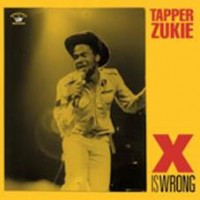 Tapper Zukie still asking the questions and stating the facts that few artists of his calibre would attain to.His classic Dee-Jay style has been copied by many but bettered by few.Over some of his killer rhythms that he previously worked up while producing fellow roots groups such as 'Prince Allah', 'Knowledge' and unior Ross and the Spears'.Alongside some fresh rhythms, he has taken these as a backbone to some further questions and biblical reasoning that needed answering.Tapper tells it as it is on this mighty collection of tunes put together under the name 'X is Wrong'.This is the first time this set of remarkable tracks have seen a proper release only previously being available as a download from Tapper's website.A great set of songs that finally get the release they deserve..Hope you enjoy the set..