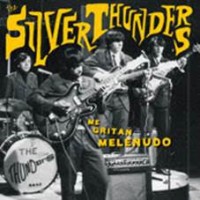 Along with Speakers, Flipper's, Beatniks, Ampex and Streaks, The Silver Thunders were responsible for one of the most exciting chapters of the early rock years in Bogotá, Colombia.Eccentric and volcanic, the quartet recorded an album in 1968 which wasn't released at the time. Rescued from old cassette tapes, that recording finally comes out five decades later, displaying the rebel spirit of a group influenced by Mersey beat, surf and garage."Me gritan melenudo" contains 'Alma agobiada', their only original composition, plus raw covers of The Beatles, The Monkees, The Troggs, Lovin' Spoonful, Miriam Makeba and The Ventures. It also includes two more Beatles songs and a couple of covers from the Wild In The Street soundtrack recorded in 1970 by Los Yoguis, as the group was known at the end of their short-lived career. Plus many photos, a family tree and the detailed story of the band.TRACKLISTSide A1. ALMA AGOBIADA2. FRESALES ETERNOS3. AND YOUR BIRD CAN SING4. MARY, MARY5. GOOD THING6. WILD ANGELS7. A DAY IN THE LIFE8. PATA PATASide B1. SUMMER IN THE CITY2. GOT TO GET YOU INTO MY LIFE3. WILD THING4. BIRTHDAY - Los Yoguis5. SHAPE OF THINGS TO COME - Los Yoguis6. LISTEN TO THE MUSIC - Los Yoguis7. REVOLUTION - Los Yoguis