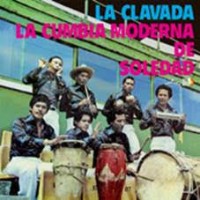 Pedro "Ramayá" Beltrán, born in Patico, a small town in Colombia's Bolívar province, is a maestro of Colombian folkloric music known as the King of the 'caña de millo' flute, although he is also proficient in various percussion instruments as well as the reed instrument known as 'gaita'.He founded La Cumbia Moderna de Soledad in the early 1970s. With this group he set out to "modernize" the folkloric music of his people, adding electric bass and a brass section to fresh arrangements of cumbias, porros, fandangos, puyas and other coste;o genres."La Clavada" (1979) was La Cumbia Moderna de Soledad's sixth record and first for Codiscos' Coste;o imprint. The LP has many excellent examples of Beltrán's inventive mix of the ancient and the modern, making for a collection of tunes brimming with tradition and yet fearlessly bristling with innovation, not the least of which is ,Crees que soy sexy', with its gaita refrain mimicking the main melody of Rod Stewart's international disco smash 'Da Ya Think I'm Sexy'. The album's title song was a massive hit in Colombia and has become a standard of the genre.Restored to its original glorious sound, this LP is poised to be rediscovered as an innovative yet rootsy gem.Presented in facsimile artwork and pressed on 180g vinyl.Part of Vampisoul's reissue series of classic LPs from Colombia's Codiscos and its sublabels such as Zeida, Costeño and Famoso.TRACKLISTSide 11. LA CLAVADA2. INDIO FAROTO3. EL CURRAMBERO4. PUÑO MOLIO5. CUMBIA SOLEDEÑASide 21. CREES QUE SOY SEXY2. LLEGO EL GORRERO3. BUSCA PERRO4. EL ESCANDALO5. LA TEMBLADERA