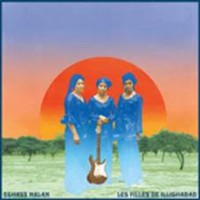 Les Filles de Illighadad present their first ever studio album "Eghass Malan". The female led avant rock group hailing from the village of the same name bring their new genre of Tuareg guitar mixed with traditional rural folk. Versed in tradition, Fatou Seidi Ghali and her band have created contemporary studio versions that are unlike anything ever before recorded, transporting rural nomadic song into the 21st century. Les Filles are all from Illighadad, a secluded commune in central Niger, far off in the scrubland deserts at the edge of the Sahara. The village is only accessible via a grueling drive through the open desert and there is little infrastructure, no electricity or running water. But what the nomadic zone lacks in material wealth it makes up for deep and strong identity and tradition. The surrounding countryside support hundreds of pastoral families, living with and among their herds, as their families have done for centuries.

Brown, Bob
The Wall I Built Myself