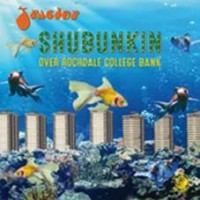 Gatefold sleeve, blue 180g vinyl. Recorded as an instrumental by Tractor in Rochdale in 1971 and originally released on LP in 1972, "Shubunkin" has now been sampled by LA band Broken Bells as the basis of their track "To Anyone a Ghost". Julian Cope writes about the Tractor track "Shubunkin" >..."Then, one night in mid 1972, John Peel played a track that was more mysterious than almost anything I had ever heard. It was the music I thereafter wanted played at my funeral and was most certainly the sound of a soul approaching the canopy of heaven as it left the earth for the last time." Issued now as a protest against Rochdale Boroughwide Housing's plans to knock down four of the Seven Sisters&College Bank Flats/ these blocks of flats were home to Tractor's drummer in the 1970s as well as their manager Chris Hewitt and a whole host of poets, musicians,etc. Many Tractor numbers were worked out in these flats prior to recording at various studios around Rochdale and Heywood. The album now starts the way Julian Cope always wanted to run.