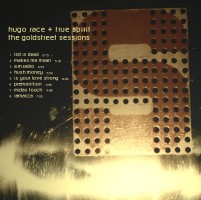 After 16 years this album will be released the first time on vinyl at Gusstaff Records in limitededition of 500 copies.It was the 9th album of Hugo Race & The True Spirit, one of the most important in his verylong history of solo activity.Hugo Race, formerly of The Wreckery and Nick Cave and the Bad Seeds and now aninternationally based producer, composer, performer and author, delivers intense sonicsoundscapes that merge folk, experimentalism, electronica and rock. Originally from the 1980'sMelbourne post-punk music scene, Hugo's ever-expanding network of collaborations, bands andmultimedia projects are spread over several continents.Wire:".Recorded in Berlin, Melbourne and Catania, the Goldstreet Sessions has a warm live feel. True Spiritare joined here by Sicilian writer and singer Marta Collica (who also teams up with Race in Sepiatone)and Swans/Angels of Light guitarist Kristof Hahn. It opens with the low synth ruminations and trumpetblasts of "LSD is Dead". The kick drum's motorik beat sets an urgent pace, which Race's deep baritoneeffortlessly takes in its stride. Elsewhere, his arrangements imaginatively deploy soupy wells of bass,harps and a beatbox intertwined over puckered jazz and soft electronics.. intense atmospherics echoingthrough dark skies."Eclipsed (Berlin):"Goldstreet Sessions" holds up a mirror to a world that is cold, dusty and dangerous. His (Race's) textsare merciless, like reality. "silence is golden, silence has its price" he whispers in "Hush Money", givingthe definition of the blues as black music a whole new meaning. alternatively, songs like "Premonition"and "Midas Touch" are strangely optimistic - Hugo Race goes Leonard Cohen. A masterpiece ofpsychotic blues."Frankfurter Rundschau:"Goldstreet Sessions" is Race's latest blues-mutation, defining a sound between triphop, ambient androck - the toughest and most intense record of his career. These trips are difficult - listen to the opener"LSD is Dead" or "Makes Me Mean". Race and his colleagues are way badder than Calexico, much moredistorted and twisted than today's Bad Seeds, and bluesier than any electronica/triphop project you careto mention. We take this ambient-electro-blues-trip rolling a cigarette with our eyes closed and shakingup the next gin-tonic."