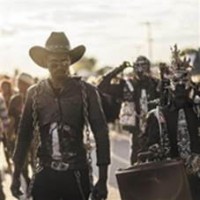 Botswana in Southern Africa is a country roughly the size of France, with Kalahari Desert taking up half of its surface area. The country is perhaps more famous for Bushmen or the diamonds found there in the 1960s than its music. It might be hard to believe that the country has a very lively and unique rock scene. Rock culture in Botswana is distinctive in many ways< the passion for playing music is more important than unnecessary technical prowess. The rockers also dress in very imaginative ways, and their clothing ranges from metal uniforms, leather and rivet wings to different kinds of masks. These aspects together make the scene in Botswana one of the most interesting in the world today. The songs on this compilation were gathered during the making of the documentary film -Freedom In The Dark- between 2014 and 2017. As of writing this in 2018 there is roughly ten active bands in Botswana and more or less same number of bands that have called it quits. Due to the fact that it has been and still is difficult to record music, especially rock, in Botswana, many bands haven-t been able to record their music at all. This compilation has been culled from what has been possible to produce on record.TRACKS>01. Crackdust / Deranged Psychopath02. Crackdust / Desecrate03. Metal Orizon / Ungazetted...04. Metal Orizon / We-re Rolling05. Overthrust / Psychosomatic06. Overthrust / Slay The Spectator07. PMMA / Imprisoned To death08. Stane / Dictator09. Stane / Run For Your Life10. Wrust / God Of The Insane11. Wrust / The Day Of The Sacrifice