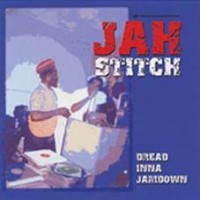 Repress!! The mighty JAH STITCH is a legend in Jamaica, making the move as so many ghetto youths have tried, from bad man to music man. He embraced the DJ culture that he himself was an integral part of and put not one, but two musical stamps on the format; his initial Big Youth sounding chant and the more spoken style that followed a near death experience when he was shot. Kingston Sounds have here selected some of his best known tracks to show his knack of working a killer rhythm and dubbed vocal with an almost call and response story telling style.