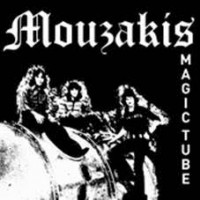 Delaware-based power trio Mouzakis conjured an intriguing sound somewhere between traditional rhythm and blues and garage rock, with psychedelic and hard rock leanings. The band occupied something of a unique space during their short reign during the early 1970s, and it was partly their non-standard outlook that kept the group a trio, since other potential musical recruits simply could not find a way through their multidirectional sound. Drummer&lead singer Eddie Stevenson and bassist & keyboardist Fred Dawson had been playing together in the mid-1960s in The Fabulous Pharaohs, which issued sparse singles on short-lived labels such as Three Star and Reprise, issuing a mix of originals and non-standard cover tunes, before splitting off to form Mouzakis, with a number of guitarists failing to last long, before Sam Stipo stepped up to the plate. Soon Mouzakis were carving out a solid reputation as an enthralling live act on the Delaware and Maryland live circuits, opening for all manner of acts, including soul group The Stylistics and smooth pop&rock act, Chicago. Following the release of debut single "Don't Want You No More" for Philadelphia's British Main Records in May 1970, debut album & Magic Tube & was issued by British Main the following year. The album certainly veers all over the map> "Party Ball" is straightforward rock & roll, while "Lady" and romance bust-up saga "Both Do Fine" skate the fine line between garage rock and psychedelia. In contrast, lengthy opener "Magic Tube" reminds of a less-polished Doors and the live cut of "Rock Around The Clock" has the benefit of unexpected organ. Definitely a one-away release by a difficult to classify band.