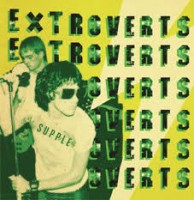 The Extroverts are one of those true punk-power pop gems unknown to the mainstream public, but not forgotten by those who remember their old days back in 1979-1982, when they shared the same bill with the likes of D.O.A, Subhumans (CA) and other Canadian punk rock favourites.From the Canadian city of Regina, Saskatchewan, they released just one single at the time. But when they reformed in 2009, they began writing "new" songs with unused, unchanged lyrics written by lyricist Brent Caron in the late 70's, paired with music created by the current day Extroverts, and they recorded them in really good sound quality. Think about the best Exploding Hearts, Pointed Sticks, The Nerves or The Real Kids and you'll get a close picture of these twelve explosive bombs of punk rock and power pop.Only 200 copies in black vinyl.

Scenics
In The Summer