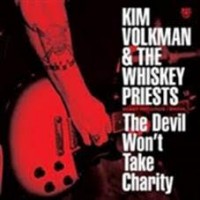 Kim Volkman has led an interesting musical life. Guitarist with Ian Rilen and the Love Addicts -one of the most underrated, raw and real bands to appear on Australian stages in the last 30 years- he's also had three stints filling his late ex-band leader's bass spot in X. Volkman's played with many lesser-known bands, including his own very good Whiskey Priests. Unlike Justin Bieber, he's never had notable success. That's probably a good thing in Kim's case, on his own admission, it might have killed him. Kim Volkman's childhood was scarred by abuse, he's had a couple of runs of smack addiction. He's been a functioning alcoholic, ridden out a number of car crash relationships and, of course, has lived, eaten and breathed rock and roll. Music's been both his salvation and his downfall, at times. Even being a rock star in a relatively small pool (that would be Melbourne) brings pressures to live up to the name. If catharsis is character building, Kim Volkman is one of Australia's most resilient characters