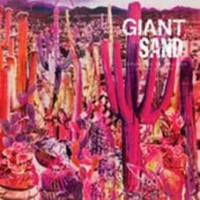 Country trailblazers, Giant Sand, returning to their early albums and re-recording them with the addition of some new ideas is becoming a thing. In 2018 they released 'Returns To The Valley of Rain', which saw them having another stab at their debut album 'Valley of Rain'. Now they are doing the same with 'Recounting The Ballads of Thin Line Men' - a new version of their 1986 sophomore effort, 'The Ballad of a Thin Line Man'.