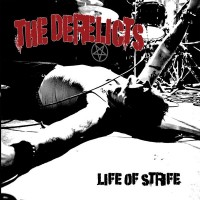 Members are Screamer Duane Bodenheimer, guitarist Neil Rogers (ZipGun), bassist Jason Freeman (Zeke) and drummer Donny Paycheck (Zeke). "I've been a fan of the Derelicts since the first time around," says Mark Arm, frontman of mainstay Seattle punk outfit Mudhoney. Seattle Punk Heroes were in the thick of it from the beginning, Moving to Seattle from Denver in 1987 They soon began sharing bills with the likes of Nirvana and Mudhoney back in the days when our little backwater town was still best known Heart, the Sonics and the 1962 worlds fair. The band released a few singles and a full length LP before imploding in a tangle of drugs, fights and frustration in the early 90's. We heard dark rumors over the years, and never thought we'd see them deliver the goods again, but miracle of miracles, they reunited in 2016 for a show that put speculation to rest. The Derelicts are back and more ferocious than ever. On June 7th The Derelicts will release their first album in 30 years, Life of Strife, Produced by Jack Endino. Life of Strife will mark the first full-length from the Derelicts since 1989's Love Machine. A handful of singles, EPs and appearances on compilations peppered the years following their debut, but any momentum the band had in the early '90s was derailed by excessive partying and the heroin bug that has plagued countless musicians. The band's implosion occurred right around the time Seattle was the epicenter of pop culture (and right around the time Mudhoney landed a major label deal). Thus, the Derelicts folded.

Why Not ?
Solo Quiero Diversion