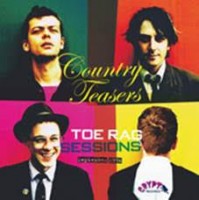 14 cuts from their first recording studio sessions of Sept 2-4 1994. Originally the band recorded 23 songs but in October 1994 Ben fired the drummer and decided to re-mix everything. Dec. 1994> Ben erases the drum track and re-drums it himself. Ben decides to jettison most of the songs and suggests 10 cuts for the debut so Crypt decided on a 10". And here they are at last> the 13 tracks cut at Toe Rag that didn't make it onto the Pastoral 10", PLUS the original version of 'Black Cloud Wandering'. In a sumptuous gatefold containing ancient pre-interWeb communication forms (letters, faxes, etc). It would have made a damned great debut album in 1994. It IS a damned great album in 2019 (and forever!).