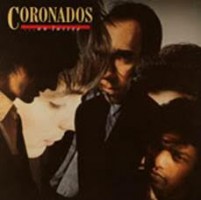 First reissue on vinyl of French greatest band of the 80s, a vivacious cult for garage fans and literate rockers!Without any doubt, France's best band of the 80s! A perfect mix of wild garage, offbeat influences (for the times) like Alex Chilton, Kevin Ayers, Harry Nilsson or Beefheart and French twisted 60s pop, all done in their own original and even eccentric style, savage but literate, loose but subtle. This is Coronado's second album, the first one (which will be reissued in a couple of months) had a very bare sound (that the band didn't like at the time but that has aged well), this one has a great full production, perfect for these ambitious songs. Despite great reviews, in France and aboard, and praise from their peers, they splited soon after and have never played again since, which has added to their myth and their cult status.Apart from long gone CDs reissues, this is the first time their records are being re-released. Buy or die!TRACKLISTSIDE AA1. UN LUSTRE2mn13sA2. COMMENT CROIRE A DE LA MÉCHANCETÉ3mn11sA3. I LIVE THE LIFE I LOVE3mn30sA4. ENCORE3mn39sSIDE BB1. INUTILE DE DIRE 3mn11sB2. BELLE JOURNÉE3mn09sB3. COLLECTIONNEUR MANIAQUE 2mn59sB4. CHIENNE DE RETOUR3mn16sB5. PAS DE RAISON DE SE PLAINDRE 3mn09s

Coleman, John Wesley
The Love That You Own