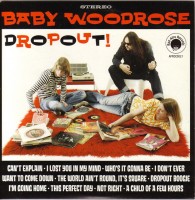 Denmark's Baby Woodrose do great covers of some of their faves! For the first time in 15 years Dropout! by Baby Woodrose will be available on vinyl again. The album has been remastered by Flemming Rasmussen at Sweet Silence and is limited to 500 copies on green vinyl. The album contains 10 covers where Baby Woodrose pay homage to both obscure and more well-known bands who have influenced them when writing their own songs. Some of the liner notes explains the origins of the album, "As much as we love playing a few of our favourite songs by obscure sixties garage bands when we play live, we also think our albums should reflect the creativity of our own originals, so the four covers we did when we recorded our Money For Soul album in October 2002, quickly ended up collecting dust in the Bad Afro vaults. We also recorded six more about a year later while doing some demos for our next album and eventually agreed to collect all those covers on this fine little release". BABY WOODROSE - the Danes around frontman, songwriter and guitarist Lorenzo Woodrose (aka Uffe Lorenzen) celebrate the rough, psychedelic hard rock of the early seventies as well as psychfolk and garage rock of the late sixties. Internationally highly regarded, undisputed gods of the Danish garage scene. Until today the freakrockers & Lorenzen release on Bad Afro Records.

Carlton Melton
Where This Leads (2lp)