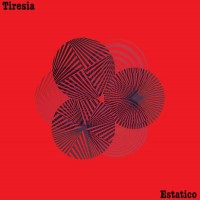 Stefano Ghittoni (former Peter Sellers & the Hollywood Party singer and electronic producer behind The Dining Rooms) and Bruno Dorella (OVO's deus ex-machina, Ronin and Bachi Da Pietra lead figure) recorded the debut of TIRESIA during 2018, following the rare tape "Inside & Outside" released in 2017. Originally the compositions were designed for a double album, in which the length of the songs and the catatonic mood should have followed those of the box released for Bronson Recordings. An extensive pre-production has instead led to a move on a more "ecstatic" spirit, drying the songs literally ("less is more"!) Ghittoni's touch remains recognizable, with his work on samples, loops and synth lines. Dorella's guitar moves sinuously inside these plots, alternating actual themes with purely timbric sounds. The two also manage to be more cinematic, transcending the ambient sound of the very beginning and leaning to the more astral territories of Sun Ra and the shoegazing grandeur of My Bloody Valentine.