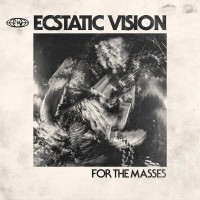 Philadelphia Heavy Psych quartet Ecstatic Vision (regarded as the second coming of vintage Hawkwind) returns with their new album "For the Masses!" After bursting onto the scene with their 2015 tribal-psychedelic LP, Sonic Praise, touring the USA with Yob and Uncle Acid & The Deadbeats, crushing Roadburn, then quickly releasing a for-heads-only, noisy, psychedelic-garage record to weed out the weak (Raw Rock Fury), Ecstatic Vision have pulled themselves out of the muck to deliver their finest album to date. Recorded in Philadelphia at Retro City Studios with Joe Boldizar and mixed & mastered by Tim Green (Earthless, The Melvins) at Louder Studios in Grass Valley, CA, Ecstatic Vision's recent fuzzed-out sound has been sculpted it into a HI&FI psychedelic wonderland. This album is the closest the band has gotten to achieving the energy of their untouchable live shows on tape. EV took a simpler approach on the art this time, using the Spanish dream-team of Edko Fuzz and Bangalore Studios. "For the Masses" blends Tripped-out Synth, Semi-Catatonic Desert driving tunes, Afro-tribal Funkadelic Vibes, Troglodyte-Detroit Rock grooves, Acid Freak-Outs, Ethereal Psychedelic Hymns, and Mind-Altering Kraut Rock into Ecstatic Vision's outsider take on modern music. It's like if Tangerine Dream jammed with Lemmy and the Asheton Brothers and decided to play some World Music and Free Jazz in 1971.

Scars Of Sodom
Annihilation Of Souls