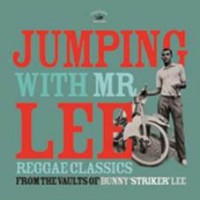 The period of 1967 - 1968 when Rocksteady was in full flow, would also be a turning point for Bunny 'Striker' Lee, when he became a producer in his own right. Many of the great tunes during this eventful year came out of his stable and initially saw the light of day on his own imprint label 'Lee's'. This album has been assembled from some of those fine tunes and tells the story of reggae in what was a stellar time for both reggae and Mr Bunny Lee.Edward 'Bunny' Lee later to become known as 'Striker' (b.23rd August 1941) got his introduction to the music business around 1962 when his future brother in law singer Derrick Morgan introduced Bunny to producer Duke Reid, who gave him a job as record plugger for his Treasure Isle label. 1966 saw Bunny Lee move on to working for producer Ken Lack who ran his own label Caltone. Bunny's first credit as a producer was released on the label when he produced 'Lloyd Jackson and the Groovers' with a tune called 'Listen To The Music'.TracklistingTrack 1 LONG TIME ME NO SEE YOU GIRL/ THE SENSATIONSTrack 2 LOVE AND DEVOTION/ THE UNIQUESTrack 3 JUMING WITH MR LEE/ VAL BENNETT AND THE BUNNY LEE ALLSTARSTrack 5 BANGERANG/ LESTER STERLING AND WINSTON "STRANGER" COLETrack 6 LITTLE BOY BLUE/ PAT KELLYTrack 7 STORY OF LOVE/ THE UNIQUESTrack 8 A CHANGE IS GONNA COME - KEN PARKERTrack 9 JUMPING WITH VAL - VAL BENNETTTrack 10 GIRLS LIKE DIRT/ THE UNIQUESTrack 11 TRIBUTE TO KING/ SCRATCH LESTER STERLINGTrack 12 SOMEBODY'S BABY/ PAT KELLYTrack 13 SOUNDS AND SOUL/ VIN GORDONTrack 14 MY ONVERSATION / THE UNIQUESTrack 15 SIR LEE'S WHIP/ LESTER STERLINGTrack 16 THE BEATITUDE/ SLIM SMITH AND THE UNIQUESTrack 17 DANCE ARENA/ ROY SHIRLEYTrack 18 MY WORLD/ WEBBER SISTERSTrack 19 RUN COME DANCE/ GLEN ADAMS

Various
Take A Knife And Open My Heart (+cd)