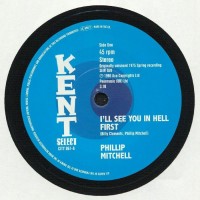 Phillip Mitchell only cut one single for the Spring subsidiary, Event, in 1975 and despite the beautiful ballad 'There's Another In My Life' being an R&B hit, he did not have a follow-up. However, there were three songs recorded at the Brad Shapiro-led Muscle Shoals session and 'I'll See You In Hell First' was the superb mid-tempo track that lay dormant until compiled on an Ace CD in 1990. It features Mitchell singing at his best on an inspired, self-penned song and is long-overdue a vinyl pressing as originally hoped for. Singer Ray Godfrey had four 45s for the label but like Mitchell he was best known as a songwriter for Millie Jackson, Joe Simon and Act I in particular. He wrote under his real name of Raeford Gerald. He produced this song on both Joe Simon and Millie Jackson and his own reading has now been found on the multi-track tapes for the song's recording session. It is a worthy addition to the Godfrey/Gerald catalogue.