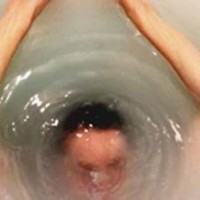 'Autonomy', the latest LP from The Golden Filter, is also the first released through the band's own 4GN3S imprint. On 'Autonom'y the duo of Penelope Trappes & Stephen Hindman turn in a set of dark and politicised synth-pop. Feminist rhetoric and state-of-the-nation concerns are snuck under the radar here, covered by sensual beats that draw from Italo-Disco, EBM and minimal wave. It's all very Italians Do It Better.

Barnett, Alex
Chew From The Mind