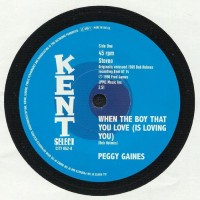 Nashville singer Peggy Gaines had two singles on Ted Jarrett's Ref-O-Ree label but the best track, the Bob Holmes-written and produced 'When The Boy That You Love (Is Loving You)', was only discovered in the mid-90s. Released on CD and a limited 100 Club Anniversary single, it became a guaranteed dancefloor filler and is still in demand, fetching over £100 for that first pressing. The plaintive ballad 'Everybody Knows' is making its vinyl debut and will appeal to both Southern and Deep Soul aficionados.

Spanky Wilson
You/ Sunshine Of Your Love