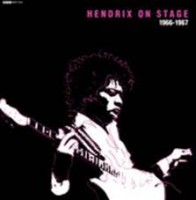 Back in stock! Hendrix flew into London from New York on September 23rd with his new manager Chas Chandler and within a couple of days started auditing for his band. Noel Redding got the bass job on September 30th with drummer Mitch Miller joining on October 5th. After 3 days of rehearsals, the Experience played a four/date French tour supporting Johnny Hallyday and Brian Auger. Side One opens with Wild Thing, the finale of the October 18th Paris Olympia show, broadcast by RTL. The band's first British radio show was for BBC Pop North and featured Hey Joe and Rock Me Baby. It was recorded in London on 30th January 1967 for playback at Playhouse Theatre in Manchester from where it was broadcast on 7th February. The other two tracks on Side Two, Hey Joe and Purple Haze were recorded at the Marquee on March 2nd 1967 for the German TV show Beat Club. Side 1 1. Wild thing 2. Hey Joe Side 2 1. Rock Me Baby 2. Hey Joe 3. Purple Haze