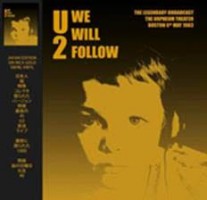 From September to November 1982, the group recorded "War" at Windmill Lane Studios. The new album was very well received and during 1983 U2 embarked on the War Tour of Europe, the US, and Japan. This records is the re-energised U2 broadcasting live from the Orpheum Theatre Boston 6th May 1983.TracklistSide AOut Of ControlTwo Hearts Beat As OneSecondsSunday Bloody sundayI Fall DownSide BNew Year's DayGloriaParty GirlI Will Follow40